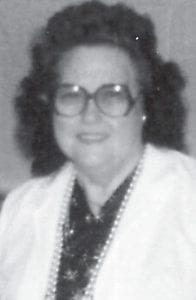 Funeral services for Selma Riley, 86, were held July 26 at Letcher Funeral Home. Burial was in Green Acres Cemetery at Ermine.

A daughter of the late Phillip Henry Sheridan Sr. and Dessie Virginia Sowders Collier, she died July 22 at her home at Fleming.

She was the widow of Bill Riley and was a teacher for 34 years, including 30 years at Hemphill Grade School.

Joyce, Wise, Va. ~ She was a sister of the late Kermitt Collier and Roy Collier.