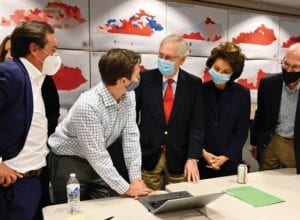 Republican Senate candidate Sen. Mitch McConnell, center, talks with a staff member as they gather around to watch the results of his reelection campaign in Louisville Tuesday. McConnell’s wife, Elaine Chao, stands next to him. (AP Photo/ Timothy D. Easley)

The 78-year-old McConnell defeated Democrat Amy McGrath, a retired Marine combat pilot. McConnell played up his decades-long Senate career as an asset for Kentucky while McGrath portrayed the veteran politician as personifying everything that’s wrong with Washington.

“The people of Kentucky had a clear choice and they sent a clear message,” Mc- Connell said in declaring victory. “Tonight, Kentuckians said that challenging times need proven leadership.”

Kentucky kept its “front-row seat” in the Senate with his victory, McConnell said. But what remained in doubt was whether he’ll spend the next two years as Senate majority or minority leader. Democrats made a strong push to reclaim the Senate.

“ We don’t yet know which presidential candidate will begin a new term in January,” he said. “We don’t know which party will control the Senate. But some things are certain already. We know grave challenges will remain before us, challenges that could not care less about our political polarization. We know our next president will need to unite the country, even as we all continue to bring different ideas and commitments to the table.”

More than 1.5 mi l – lion ballots were cast in Kentucky during weeks of mail-in and early in-person voting because of the coronavirus pandemic, leading up to actual Election Day balloting.

At the top of the statewide ballot, Trump won Republican-leaning Kentucky over Democrat Joe Biden. Trump has towered over Kentucky’s political landscape, which has combined with McConnell’s generation-long presence as a force in statewide politics. Kentucky also held down-ballot contests that included races for Congress and the state legislature.

The Senate race dominated statewide airwaves as McConnell and McGrath offered stark contrasts. Both candidates poured tens of millions of campaign dollars into a race that was influenced by the COVID-19 pandemic and the federal response to the health crisis.

McConnell, the longest-serving Republican Senate leader in history, said his leadership post enables him to deliver federal money and to craft policy benefiting the Bluegrass State.

McConnell played up his role in giving the federal judiciary a more conservative tilt by leading Senate confirmation of more than 200 judges nominated by Trump, including Amy Coney Barrett’s recent rise to the Supreme Court.

As Trump’s top ally on Capitol Hill, McConnell led efforts to defend Trump during his impeachment acquittal in the Senate and worked with Trump on a tax overhaul.

McGrath, 45, is a term-limits advocate who said she represented a new generation of leadership. She portrayed McConnell as an obstacle to progress on health care, immigration and racial and economic justice issues.

For McGrath, it was her second loss since 2018, when she was defeated in a congressional race.

The federal response to the coronavirus pandemic became a campaign flash point. McGrath faulted Mc- Connell for the lack of another federal virus relief package in the weeks before the election. McConnell blamed Democrats and touted his role in passing a $2 trillion virus aid bill early in the pandemic that delivered more than $13 billion for Kentucky.

Republicans have long dominated federal elections in Kentucky, backed by overwhelming support across the state’s sprawling rural regions. The last time Kentucky Democrats won a U.S. Senate race was in 1992 with Wendell Ford. Trump’s enduring popularity in Kentucky, along with McConnell’s long winning streak, made the odds long again this year for Democrats.

McGrath tried overcoming those disadvantages by running a tireless, aggressive campaign. She raised tens of millions in campaign cash — fueled by Democratic anger toward McConnell as Trump’s chief congressional bulwark in pushing a conservative agenda. McConnell, always a prolific fundraiser himself, had huge amounts of campaign money at his disposal as well, and the two candidates ran hard-edged TV ads hitting each other.

McConnell and McGrath differed on a range of issues, highlighted by their vast differences on health care policy. McConnell has pushed to repeal the Affordable Care Act for years, while McGrath supports the Obama-era health care law, which provides health insurance for tens thousands of Kentuckians. She supported adding a public health insurance option and expanding access to Medicare for people 55 and older.