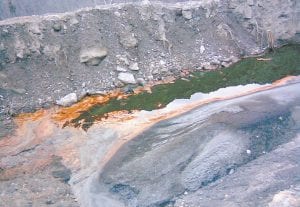 NOTHING TO WORRY ABOUT? — A group of Letcher County citizens were out hiking Feb. 26 when they came upon this pit of water from a natural gas well on Town Hill, between Whitesburg and Little Cowan. Damon White, supervisor for the Division of Water’s Hazard office, said when gas wells are drilled, pits like this one are dug to contain substances that need disposal. White said everything is fine as long as nothing leaves the pit until it is cleaned up. “If it runs over into a stream, that is a different story,” he said. Scenes like this one may soon be seen in Kentucky’s state parks.

Public lands, including state parks, could be leased for oil and gas exploration if a bill passed by the Kentucky Senate becomes law.

Senate Bill 138, sponsored by Sen. Tom Jensen (R-London), would allow state agencies and universities to lease their property for drilling. Any leasing fees or royalties would go back to the agencies for their own use, and the process would make sure that the state receives a fair price for the mineral rights, Jensen said.

Jensen, whose 21st District includes Estill, Jackson, Laurel, Menifee, and Powell counties, said that if the bill becomes law, companies who would drill on public lands would be held to a higher environmental standard than those who now drill on private property.

The bill is co-sponsored by Sen. Robert Stivers (R-Manchester), whose 25th District includes Clay, Knox, Lee, Magoffin, Morgan, Owsley and Wolfe counties. The districts represented by Jensen and Stivers are home to some of the most scenic attractions in Kentucky, including Red River Gorge and Natural Bridge State Park.

Regulations in the bill require any lease to be in the “best interest of the Commonwealth” and maintain environmental quality of the land.

Many other states already allow such leases, and federal land in Kentucky is already eligible, Jensen said.

“The University of Kentucky is currently drilling on property in another state that it has an interest in,” he noted.

The bill has received little notice since it passed 36-0 on Feb. 27. It was received in the House for its consideration on March 2.

The Kentucky Resources Council, an environmental watchdog group based in Frankfort, has stated its opposition to the bill.

The Senate also approved by a vote of 36-0 on Feb. 27 a joint resolution, SJR 67, which would direct the state Department for Energy Development and Independence to enter into a memorandum of agreement with the Kentucky Geological Survey to study the value of potential oil and gas operations on state-owned and university owned lands and to identify factors that may limit development of such a program.

The resolution, also sponsored by Jensen, would direct agencies with information on ownership of state-and university-owned lands to furnish that information to the Geological Survey for the purposes of the study and direct the Finance and Administration Cabinet to assist the department in the development of a model lease and lease oversight guidelines to assure oil and gas operations would be conducted in accordance with state law. The resolution would also require the report be submitted to the Interim Joint Committee on Agriculture and Natural Resources by December 1.

A bill similar to Jensen’s was introduced earlier this year to the Ohio state legislature, where a move is underway to open more state-owned land, including state parks, to oil and gas drilling.

Ohio doesn’t now permit drilling in its parks and nature preserves, but state forests and wildlife areas are open to drilling.

In West Virginia, oil and gas drilling is allowed in state forests but not in state parks.