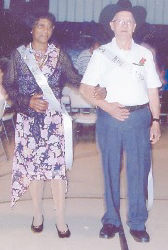 We had a wonderful week. June 2 we went to Kingscreek for our Senior Citizen Prom. A king and queen were selected.

Carl Parrott from our center was selected as king, and Kathryn Oden from the Boonefork Center was picked for queen.

We also had a talent contest. Lydia Hall won first place for her dancing, and Carl Parrott won second place. He played the guitar and sang. Both are from our center. A man from Blackey got third place.

We would like the thank ‘Flowers By Lisa’ for donating the flowers for our corsages. They were really appreciated. We had a great time and a delicious meal, turkey and all the trimmings.

June 4, we went to the Virginia/ Kentucky Fair at Wise. Seventeen from our center went. Vina Lucas enjoyed petting all the animals. Carl Parrott won a large basket filled with all kinds of things. He’s one lucky fellow. Everyone had a great time.

Coming back, we stopped at Robo’s for an ice cream. That really set the day off. We’re looking forward to the next one, maybe a July picnic we hope.

Two of our senior citizens died recently. They were Jeanette Fields of Whitesburg and Flo Mayhew of Mayking. Our sympathy to both of the families.

Come and see what we’re doing and join in with us. We’d be glad to have you.

God bless until next time.