Senior citizens to have a busy week 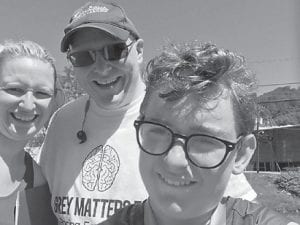 There’s so much that is going on this coming week with the Letcher County Senior Citizens. The trip to the flea market that was scheduled for last Wednesday had to be cancelled because our director, Debbie Baker, came down with a case of the shingles first and then after that she came down with a really bad cold. So, she was off all week. But, this coming Wednesday, the 22nd, is the annual cookout at Letcher Manor and then Friday at Letcher County Recreational Center awards will be given to the seniors who placed in the Senior Games competition. Lots of Letcher County seniors will be receiving awards and I hope to get lots of pictures for the paper next week.

We also have lots of seniors that are in desperate need of prayers. Doug Wright will be taking treatments at Hazard for cancer and his wife Pat Wright is very worried about him. She gave us some wonderful news last week though. She said Doug had accepted Christ as his Savior. Praise God for that!

Estel Taylor is still in the nursing home. Juanita Banks has still not made it back to the center since her knee surgery. Lizzie Mae Wright is having major problems with her shoulder. Lelah Adams Dixon’s arm has still not completely healed since she fell and broke it. Then, there’s one of our seniors and also a very close and special neighbor, Imogene Sexton. She and of her children and grandchildren need our sincere prayers. I saw on Facebook where her daughter Sandra Wilson had posted pictures of their outing to Fishpond Lake over the weekend. I’m so glad they were able to make those special memories. Imogene looked so pretty. We never know what our next day will hold, so if you aren’t a Christian let me tell you, you are missing out on wonderful blessings here and an eternity of them after this life is over. 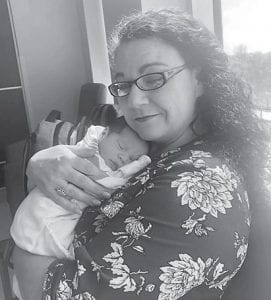 I completely forgot last week to tell you all about my granddaughter Drew Eden Hampton and the performance of Fleming- Neon Middle School in “Alice in Wonderland”. They were absolutely amazing. I, of course, had to go both nights and I noticed lots of other parents and grandparents were there Friday and Saturday both. Friday night they were much more up to it than Saturday though. I guess I could understand though, because they had performed it all day Thursday and Friday for the other schools and by Saturday they were completely drained. It was good and if I hadn’t seen Friday night I wouldn’t have noticed how tired they were Saturday. Drew performed her part with her good friend Haley Webb. They were the “ Tweedle Dee” and “Tweedle Dum” and they were perfect. It’s so hard for me to believe that people can actually remember that many lines and when to say what. But, anyway, if you get a chance to go see our young students perform in any of these plays you should go. 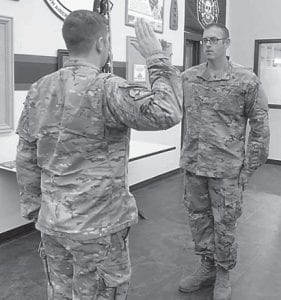 Philip Marshal Graves is pictured reenlisting into the Air Force. His maternal grandparents are Dorothy Tacket and the late Marshel Tacket.

I saw pictures also of the farmer’s market and other activities that took place in Whitesburg Saturday, the 18th. The Grey Matters 5K run that was held to benefit a certain type of brain cancer found in the grey part of the brain. As many of you know, our hometown weather man, Brandon Robinson, had this type of cancer. He and his wife Stephanie posted this on Facebook and I copied it here. 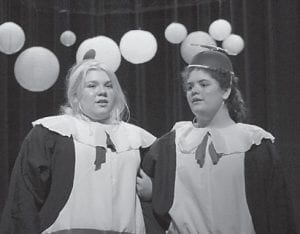 “ Stephanie Robinson and I can’t say thank you enough to you all for today. Your overwhelming support for the last two years has been nothing short of amazing.

We are blessed to know each and every one of you and are glad God put you in our lives.”

There are three birthdays I wanted to mention. One is Flo Stamper, another one is one of our church members at Letcher Independent Baptist, Arthur Christon. Then, last but not least, is my granddaughter Drew Eden Hampton.

Flo is one of a set of triplets that attended Fleming- Neon High School with my husband. Her other two sisters are Josephine, aka Jo, and Ernestine, aka Ernie. Flo is now a retired teacher and we have gotten to one another through the rec center. She celebrated her birthday on May 17.

Arthur Christon and his wife Gwen are the owners of Isom IGA at Isom. I could tell you all kinds of things about Arthur, but never enough to let you know how much our church and community appreciate him and wife. He is also my soul brother and one of these days I am going to surprise him and accept his offer to sing in his place, NOT!

Drew, or as family calls her “Drewby Do”, will be 15 years old and I know we all say how time flies when we are talking about our children, but it kills me even more to see our grandkids grow up. She is actually graduating from Fleming- Neon Middle School Monday, June 3, at 6 p.m. Well, she says she isn’t going through the ceremony, but she will still be a graduate. They surely didn’t get this being embarrassed to be seen in public from me.

Mom and I also want to thank her grandson and my nephew, Philip Marshal Graves, on his reenlistment into the United States Air Force. He is the son of my sister Lucille and her husband John Graves. He has always been a firecracker and oddly enough was born on July 4. I remember Lucille spanking him once when we were having a cookout at Charlene and Rick’s. She was complaining about him not listening to her at all and worried about his future in life. I told her, “You never know, he might turn out to be a president of the United States.” She said, “That still wouldn’t make it worth my while for what all I have had to go through with him.” He was only about 4 years old at the time. He is married to Kymberlee Graves and they have 3 children. He has been deployed throughout his career many times. They now live in South Dakota. What do you think about him now, Lucy?

Charlene messaged me yesterday and said she saw Jeanette Adams at church yesterday where they sang for Memorial Day services. Jeanette worked at Isom Double Kwik in the restaurant part back when Mom’s sister Pearl was living. We would go there every Thursday and eat with Charles and Pearl and sometimes meet their sister Linda Hall there. We loved talking with Jeanette and also loved her cooking. But, anyway, she wanted us to mention her son, Rick Adams, and ask all that would to please pray for him as he battles cancer. So, many of our families and friends are fighting some form of cancer. Remember our friends, Scarlett Coots and Greta Howard, in their treatments of breast cancer. Billie June Richardson asked me today to remember to pray for her brother Johnny Craft with colon cancer.

I want to ask everyone to please remember our pastor and his wife, Bill and Sandy Jones and their whole family. They will be going to pre-trial again this week.

Oma Hatton has a new great granddaughter, Mara Bliss Hatton, born May 7. She is the granddaughter of Billy and Sandra Hatton of Colson and the daughter of Joe and Courtney Hatton. Speaking of Oma, remember to be in church Sunday morning and if your church has services Sunday night and throughout the week you should be there then, too.