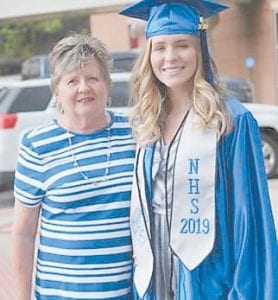 Karen McAuley and granddaughter Bella Back

Well, I didn’t think I was going to get to write an article for this week. Saturday morning about 3:15 a.m., I could tell I was in the beginning stages of another episode of pancreatitis.

I was spending the night with Mom and so I had to call my husband to come get me and take me to the WARH emergency room. I could have driven myself, but it’s hard to drive and throw up at the same time. I’ve done that before, too.

Believe me when I say, that’s not one bit pretty. It took my husband about three hours to clean up the car. But, like most of my attacks, my enzyme levels come back down almost as fast as they go up to the dangerous level.

So, I was discharged Monday about 10. I found out many years ago at the Medical University of South Carolina where they did an ERCP that I have a stricture in my Sphincter of Odi, (Yep, everybody has a Sphincter of Odi).

This is the main thing that causes my attacks and there isn’t anything that can be done that hasn’t already been done outside of surgery. That type of surgery would be more dangerous than open-heart surgery with far less chances of being successful. 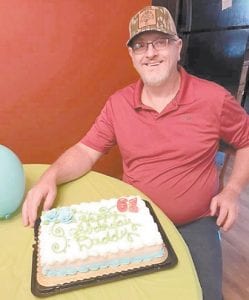 It’s only done in the situation of life or death. So, I’ll live with it and count my blessings.

Johnny Craft, Imogene Sexton, and all the others who have faced or are facing cancer right now.

On a brighter side of things I’ll tell you about the Letcher County Senior Citizens taking a trip to the Indian Creek Flea Market at Wise, Va. last Wednesday.

They enjoyed the ride over and the Ponderosa in Norton, but the flea market was a rainy mess. I talked with George McHone after they returned and he bragged and bragged on the food. 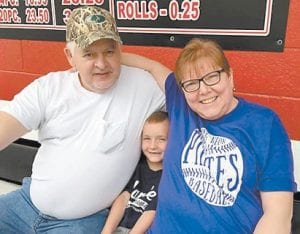 Wendell and Alicia Cook are pictured with one of their grandchildren, Eli Combs.

I found a few birthdays and anniversaries on Facebook this past week that I wanted to mention. First of all, my sister Lucille and her husband John celebrated their 41st anniversary as did Mom’s next-door neighbors, Wendell and Alicia Cook. You know I used to think people that had been married that long were as old as the hills, but for some reason I don’t feel that way anymore.

Speaking of getting old, another one of our longtime friends and neighbors, Leonard Begley, celebrated his birthday last week. He turned 61 on June 7, but you surely couldn’t tell he’s that old if you were watching him at the rec center just about every weekday morning.

My first cousin, Lelah Adams Dixon, also celebrated her birthday Monday the 10th. She would probably get upset if I told you her age, so I won’t.

I have looked at so many posts on Facebook that contained pictures of all the graduates in the county this past week with many tears in my eyes. The Letcher County Central High School ones are the ones that made me tear up the most.

I had lots of them in the 3rd grade at Martha Jane Potter when I had my first really bad pancreatitis attack. I was in ICU for 5 days and in a private room after that for 5 days.

But, the kids I had then are the ones that graduated Friday evening. I have so many things saved from that hospital stay from that class. Lots of them taped coins to their cards.

Don’t ask me why, but I figured maybe somebody had told them I wouldn’t be getting paid while I was out or how much my hospital bills were going to be.

One card was a group one from Drew Richardson, Bella Back, and Hannah Kincer. Then Bella made me one all by herself, too.

The week before I had just gotten onto them for not returning their homework and had told them some type of punishment I was going to give them if they didn’t. Well, lo and behold, the next day the only person that didn’t return theirs was a child that had always brought hers in, Bella Back.

She went into a fit when I started asking her about it and starting crying and hunting all over everywhere for it. All the other students were just watching her with their mouths dropped open not knowing what to do or say.

She finally found it and then just laid her head down on her desk with the deepest sigh. Well, the card she made me had a P.S. on the back that said, “Oh by the way, I did my math homework last night.”

Bella will be part of the pre-law program at Georgetown College, as well as the Oxford Honors Program.

We want to thank everybody that reads our column and makes comments to us or our family. The whole time I was writing the piece last week about Charlene being the “queen of everything” I was laughing so hard.

Well, she didn’t get to read the paper until she was here at Mom’s on Saturday, and she said she wondered why all kinds of people was calling her the queen last week.

Really, I thank God so much for my three sisters and my brother. I wouldn’t want to go through this life without them.

Please remember Elaine Smith’s family and all the others that have lost loved ones. Keep our pastor, Bill Jones and his wife Sandy and their family in your daily prayers.

Ending once again and always as Oma did every week, try to be in church Sunday morning. If your church has services Sunday evening and throughout the week God expects you to be there then, also.