Seniors can ‘bowl’ without having to leave the county 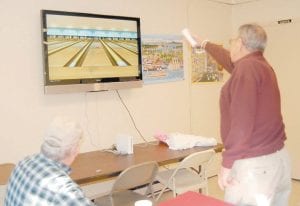 Seniors can ‘bowl’ without having to leave the county

Just as many children in Letcher County are learning how to play with new toys they received for Christmas, senior citizens who frequent the county’s senior centers are trying to figure out how to play Nintendo’s Wii gaming system. 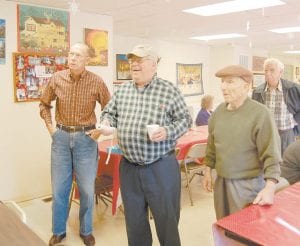 "When everyone gets used to it, it will be a lot of fun," said Lennon

The Letcher County Fiscal Court has purchased 50-inch flat-screen televisions, Wii Fit and other Wii gaming systems for each of the seven senior citizens centers.

Hammock and Charles Day, also of Whitesburg, played a video bowling game for the first time on December 29 at the Ermine Senior Citizens Center and kidded each other when their virtual bowling ball ended up in the gutter.

Lennon Hammock’s wife, Yvonne, sat at a nearby table and watched as her husband moved his arm back and forth with the Wii control.

James Hall, of Thornton, said he used to bowl at bowling lanes and would like to try bowling with the Wii gaming system.

"It’s a good thing to have," said Hall. "You have to learn how to use that thing."

Coleene Hart, of Ermine, said she hasn’t played the Wii yet, but wants to try the golf game.

"I think it is good for older people’s coordination," she said.

"It helps them with their balance and strength in their legs and arms to maneuver better," Ward said. "It helps you work on your posture."

"It will help keep your mind straight," said Day. "It’s something for them to do to pass time. It’s better than to sit and stare at four walls."

Hart said seniors also do other activities at the Ermine Senior Citizens Center, including working puzzles, playing Bingo and quilting.

"They had (bowling) shirts and everything and that is what got me interested," said Banks.

Banks said he wants the centers in Letcher County to create bowling leagues and play each other.

Ward said Wii bowling or golf leagues could be a way that senior citizens from all parts of the county could get to know each other.

Ward said he hopes the Wii gaming systems will increase camaraderie among the centers and will promote health and wellness.

"The interaction amongst the seniors is just joyful to watch," said Ward.