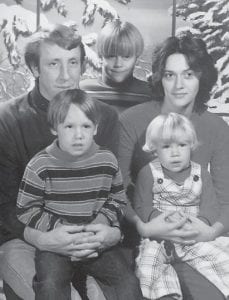 Jimmy Boggs is pictured with his wife Linda Sharon Adams Boggs with their three sons.

Well, we finally were able to go visit Auntie Linda at Letcher Manor Nursing Home and while we were there we also stopped in to see my uncle, Robert Wagner. Both of them looked really good.

Linda Hall’s foot was unwrapped and it looked a lot better than I have seen it in a long time. She said she is supposed to be exercising her legs.

Robert said he still isn’t able to walk and they really don’t know why. We saw a few other people we knew, Edith Martin, Gleeda Taylor, Jack and Mabel Adams.

Also, Junior Kuracka’s friends at Senior Citizens said they called to let them know they are waiting on a room for him at Letcher Manor Rehab. So, I’m sure all these people could use our prayers.

Monday at Senior Citizens, Debbie Baker and Sue took a busload to Breathitt Senior Citizens for the annual Rook tournament. Mom and I left before they reported back to let us know who won the tournament. I know they had lots of fun even if they didn’t win. 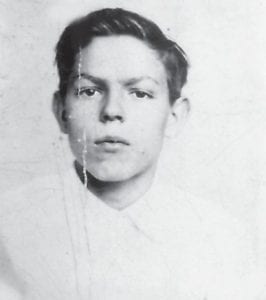 There are so many other things going on at the rec center. In the mornings there are all kinds of physical trainers working with individuals. Also, lots of seniors working out or walking or both. In the evenings it is so busy, it’s sometimes hard to find a parking place.

I work out with Maranda Webb’s class. She works on different body parts all throughout the week. There are other trainers that I’m not familiar with, but I’m sure they are just as good. You all should try it; you might like it.

I wanted to add another entry or two from Daddy’s journal. He’s been on my mind almost all day because today was the day he passed away 14 years ago. Here’s a little insight into his childhood.

“We decided to build a road down to our swimming hole. We did it under the supervision of Bill Hudson. We had a great time doing it. After the road was built we picked us out a fine place down by the swimming hole and began us a log cabin. I don’t remember how many of us were in on it but we finished a one-room cabin in fine shape. What we couldn’t beg from people, we stole. We had oil lamps, a water bucket, butcher knives, and anything else easy to come by. I remember helping steal some lumber from a mill not far from our cabin. Nails and hinges we stole. I didn’t exactly steal much, but I knew it was being stolen. We spent some nights down there, and it got pretty smoky with the rig we had to cook on. I made a sign and put up over the door that read ‘If we want you, we will invite you, otherwise keep out.’ It was lots of fun and I guess we gained a lot from the experience of building it. As you know there are very few cabins ever built by boys. Lots started but very few ever completed.

“My grades at Whitesburg High School were as bad as they were at Caryville Junior High School, where I come from. I believe if we don’t get our children off the ground and help them get started it will be a matter of time before they are forced out of school. Me and Hubert both were in this boat. We moved around so much during our key years and we lost out on our education as far as school is concerned. Hubert has come out from under it much better than I have. I can’t say that my parents didn’t do everything possible to help us get an education. I believe I could have done better if I had been pushed. My teachers didn’t bother because they could see I was much too far behind to even go along with the group. If I had been given exactly what I made I wouldn’t have made one passing grade at Whitesburg High School and I went two years and three months.”

Daddy did later get his GED while he was laid off from work. He was signed up on what they called the Happy Pappy Gang, which was kind of like the unemployment program of today. But, he had to work to get his benefits.

They worked around the county building bridges, and other construction such as that. There’s a bridge down on Route 7 from Colson to Isom that he helped build. It was during this time he was able to take classes to get his degree.

I have some bad news this week. One of my first cousins, Linda Sharon Adams Boggs’s husband passed away Sunday. He has been battling cancer for many years now. Her sister, Lelah Adams Dixon, told me last week they had to place him with Hospice Care last week so they knew it wasn’t going to be long. They had three sons and I’m not sure how many grandchildren.

I had the pleasure of having three of their grandchildren in my class at Martha Jane Potter. They were both wonderful students and wonderful children.

His services will be Tuesday evening at 6 p.m., and the funeral Wednesday at 1 p.m. Both of these will be at the Rockvine Baptist Church at Partridge.

Remember to please pray for my pastor Bill Jones and his wife Sandy as they continue to mourn the loss of their son Bobby and his girlfriend Chrystal. Also, remember all the others who have lost loved ones.

And, as Oma Hatton always said as she closed our her column, remember to attend church somewhere Sunday morning and if your church has services Sunday evening or throughout the week God would want you there then, too.