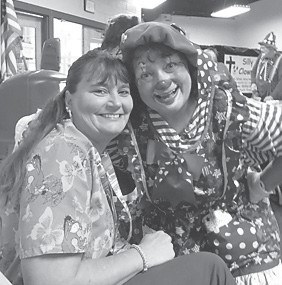 Carmen Brock is photographed with a clown that performed at Senior Citizens in the Clowns for Christ performance.

Appalachia Days at Alice Lloyd College was wonderful. My oldest granddaughter, Drew Eden Hampton, went with me and Mom. She loved the fried Oreos and fried cookie dough almost as much as Mom and I enjoyed the singing and the socializing.

There were so many wonderful vendors with many different types of crafts. We saw many different painted items, gourds, signs, and wood plank signs to name a few.

My husband and I have been growing gourds for the past few years and are really getting into all the things that can be done with them. We love the apple gourds and got our first seeds from Peggy Maggard. But they have been the most difficult ones to grow. If anyone has any advice on how to grow good thick-skinned gourds, please let us know.

My mother-in-law continues to gain strength. We are so pleased that she is using her walker now to walk some.

My aunt Linda is now in the nursing home at Letcher Manor and loves company if you get a chance to visit her. Just wait until The Price is Right, Let’s Make a Deal, Wheel of Fortune, or Jeopardy goes off though. 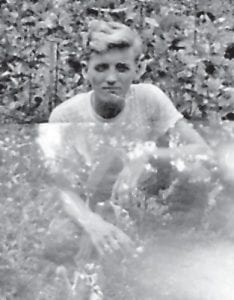 Mom and I visited with her Friday and it was during The Price is Right. I told Mom when we left we picked a bad time to visit because all three of us was watching the show instead of trying to talk to each other.

The Letcher County Senior Citizens enjoyed their trip to Lynch last week. They are also planning to go to the Breaks this Friday and it is also Unity Day for uniting against bullying. Don’t forget to wear your orange that day too to show your unity.

Mom and I can’t wait to get back to our rec and Senior Citizen routine. Last week we had so much going on that we missed every meal but Monday. I hear so many of the seniors say how much it means to them to be able to come there and see and talk with all their friends. So many of them have no family at all that live in Letcher County and that little bit of time together is all they have with other people. 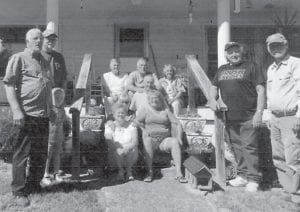 Thelma Campbell Watts of Kingsport, Tenn., formerly of Linefork, celebrated her 91st birthday recently. She is the daughter of the late Manon and Meldie Campbell of Linefork, and the mother of Richard Watts, Harry Watts, Larry Watts, Gary Watts and Mildred Graham, all of Kingsport. She is the second mom of Patsy Watts, Navarre Watts Jr., Wanda Collier and Don Watts.

There are so many different personalities and personal stories they have to share with each other. This morning Lizzie Mae Wright brought some of her rock collection to show us. She has one that looks just like a shoe that someone brought her years ago and another one that looks like a foot. Imogene Sexton has been coming often, too, and Mom really enjoys talking to her.

Junior Kuracka has pneumonia and really needs everyone to remember him in their prayers. He keeps us all laughing at the rec center. His wife Lorraine was my second grade teacher and I kid her all the time because she had to give me a whipping for talking while she was having her reading group time. Imagine that, me talking too much. It’s funny now but it surely broke my heart then.

The Master’s Harmony will be singing this coming Sunday morning at 11 a.m. at the Lick Fork Church in Coeburn, Va., and then on the 29th at 11 a.m. at the Burdine Freewill Baptist Church at Burdine. They were part of the singing we heard at Alice Lloyd College recently. We love to hear them sing.

I wanted to tell you all a funny story about Mom when she was a young teenager and a young boy that also lived at Marlowe. His name was Coy Adams. Well, I think it’s a funny story.

She was struck on him and he was her brother Bobby’s good friend and spent a lot of time with him hunting and such. One night a bunch of them were at John Stidham’s house. His children, Lucille and Ruby, were their friends and a lot of the Marlowe young people were there too. They were playing Post Office.

I’m not sure how many of you all remember that game, but the object of the game is the person who’s in the post office gets to decide who they want to call into the post office and that person has to kiss them. I have no earthly idea why they call it Post Office, it just doesn’t make any sense to me.

Now when we were growing up one game was called Spin the Bottle, and that title makes perfect sense. If Mommy had known we were playing that game at our house, well let’s just say she wouldn’t have liked it and leave it at that.

Well, it was Mom’s turn to be in the post office and she thought this was her chance to get Coy to kiss her. So, she called him in. Guess what, he wouldn’t come in. So, I think she kind of gave up on him after that. If anyone has any idea what happened to him and his family, we would love to know.

I think Oma was in touch with his sister Lula Mae a year or two before she died. We love to get Mommy started talking about the old times.

Billy Hatton and his wife Sandra came up the other day and Sandra told me the kids and grandkids would always get Oma involved in telling her stories of old times too.

Sandra told me one of Oma’s and Oma may have told about it in her column before but I think it’s worth repeating.

She said Oma said once she went to a funeral and started noticing that she didn’t recognize any of the people but stayed anyway and then when the procession went up to the coffin after the services it wasn’t someone she knew. I can just see Oma doing that and it makes me laugh out loud just visualizing it.

Remember what Oma would say every week, don’t forget to go to church somewhere this Sunday and if your church has services other times during the week God would want you there then too.