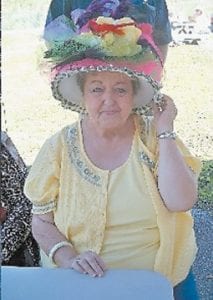 They stepped into the winner’s circle and might even have taken a bow, had it not been for their hats.

The Colson Community Center celebrated one of Kentucky’s oldest traditions by hosting its first ever Kentucky Derby Hat competition on Friday, April 30.

Dozens of senior citizens came all decked out in some of the most spectacular hats Letcher County has ever seen.

74-year-old Coleene Hart used a gallon-sized ice cream container and a piece of styrofoam to make her hat. She added some hot pink feathers to top it off .

Hart didn’t take home a prize, but certainly was a good sport about it. She said the Derby hat competition was a fabulous idea.

“It’s just great that all of the centers have gotten together, said Hart. “We’re all proud to be Kentuckians and this just a great morale booster.”

Winners were chosen from six of the county’s community centers.

Hats off go to all of the winners —Creeda Isaacs of Colson, Anna Wright of Blackey, Debbie Miranda of Ermine, Loreva Fields of Kings Creek, Ruby Adams and Linda Curry of Oven Fork and Hope White of Boone Fork. 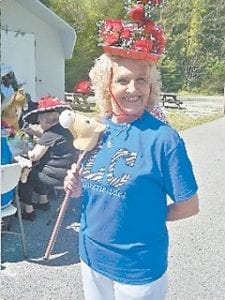 NOTE: More photographs from the Derby Hat Competition will appear later this week at www.themountaineagle. com.