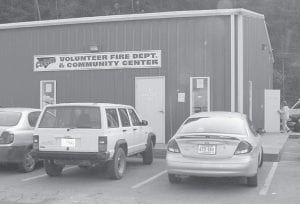 NEW ADDITION – The Colson Senior Citizens Center, which had its grand opening November 16, is located inside the Colson Fire Department and Community Center.

Senior citizens from all parts of the county crowded into the new Colson Senior Citizens Center on November 16 to celebrate the opening of the county’s seventh center.

“It was needed because the people in this area had no place to go and interact with each other,” said Creda Isaacs, of Deane, who has been attending the new center.

District Two Magistrate Archie Banks and others who attended last week’s event said the new center will keep senior citizens who live in the Colson area from having to travel long distances to visit a center.

Banks said the cost to open the center at Colson, which is located adjacent to the Colson Volunteer Fire Department, was minimal because the building was already there.

“Because this area is so secluded it was so hard for us to drive this far to reach our senior citizens,” said Trenda Kincer, director of Letcher County’s senior citizens program.

Kincer said at least 35 senior citizens visited the new center during its first week of operation last week, and that 38 meals were hand-delivered to Colson residents.

Isaacs said that before the new center opened she occasionally visited the Ermine Senior Citizens Center. She said a center for senior citizens is important for socialization and serves as a way to check on elderly people in the community.

“For some seniors, this is the only time they get out and socialize,” said Isaacs.

Isaacs said the “meals on wheels” program that is a part of the senior citizens centers provides hot meals and interaction with people.

“This is one way to check on a person every day,” said Isaacs.

Opal Fouts, who lives next door to the Colson center, said the new center gives older people something to look forward to.

Isaacs is excited about future events at the center and encourages more people to join the Colson center.

“We’re the friendliest bunch of people you would ever want to meet,” said Isaacs.