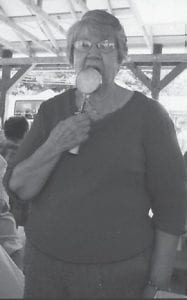 COLEENE HART cleaned the ice cream off the scoop at a picnic held at the new Kingscreek Park.

The Ermine seniors have been on another picnic. We went to Kingscreek to their new park and it is beautiful there.

We took two buses. We had 22 senior citizens and four workers that went. It was also our potluck dinner. We had all kinds of cold cuts, chips, cookies, ice cream, and a beautiful birthday cake given to us by Whitesburg Community Trust Bank as they do this for us each month. Thanks, Teresa, and all that have a part in this.

We want to go back to the park this fall when the leaves are turning.

Lennon and Yvonne went to a wedding. Their granddaughter was getting married.

Also, Rhuford and Coleene Hart, I was told, went fishing. Did you catch any fish? Or did the big ones get away? That’s what happened to me. Sure did, my line broke and I lost my biggest catfish.

Helen Bentley is still home. Glad for her.

Joyce Vermillion is back from Alaska. I will get the info from her and put it in my next news. 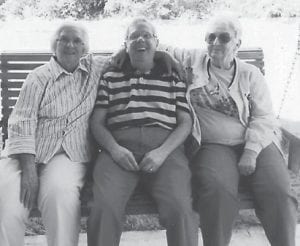 Jack and Sue Stallard missed a few days and I think he had to go get his glasses made.

Joe Bentley didn’t go to the picnic as he said he had to cut wood. I accused him of lying on the couch and cutting no wood.

Carl Parrott has had another birthday. He turned 88 years old August 20. He celebrated it with all his children (but one) at Hemphill Community Center. He danced with two of his daughters, Rhonda Cook and Sharon Amburgey. They tell me he’s a swinger. Way to go, Carl, stay young.

Oma Hatton was at our center Friday. Said she was there Thursday, but we were gone. She does that pretty often. Oma, you need to come more often and you’ll know what’s going on.

We are planning on another trip in September about the second week of the month, I think.

Patty Majority and I went out to supper Friday night. Guess who was there? That Jim Craft picking on me as usual. But he’s a good old guy. Our center couldn’t do without Jim. 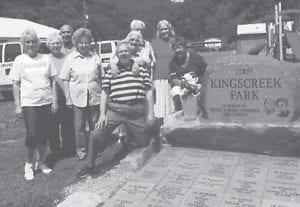 AT THE PARK — Pictured are a few of the Ermine seniors who attended a picnic recently at the Kingscreek Park.

Richard and Pauline Adams were there too. Wherever we go we run into some of our seniors. That is good. Shows we’re not staying home all the time.

Friday we had another senior citizen to come and join us. I don’t have her name, but I will get it later.

Lloyd Mullins was there Friday. We like to see new people come in, but Lloyd has been coming for about two or three weeks.

I’ve run out of news, so come and see us. You’ll be glad you did.

God bless until next time.