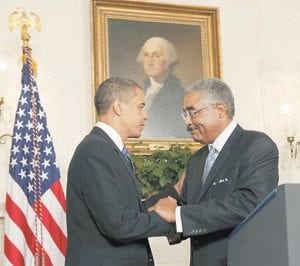 President Barack Obama welcomed the pharmaceutical industry’s agreement this week to help close a gap in Medicare’s drug coverage, calling the pact a step forward in the push for overhaul of the health care system.

Obama said that drug companies have pledged to spend $80 billion over the next decade to help reduce the cost of drugs for seniors and pay for a portion of Obama’s health care legislation. The agreement with the pharmaceutical industry would help close a gap in prescription drug coverage under Medicare.

“This is a significant breakthrough on the road to health care reform, one that will make a difference in the lives of many older Americans,” Obama said.

The president used the opportunity to make his sternest call yet for action, saying the drug agreement is one piece of “health care reform I expect Congress to enact this year.”

Obama said the move on Medicare will help correct an anomaly in the program that provides a prescription drug benefit through the government health care program for the elderly and disabled. Under the deal, drug companies will pay part of the cost of brand name drugs for lower and middle-income older people in the so-called “doughnut hole.” That term refers to a feature of the current drug program that requires beneficiaries to pay the entire cost of prescriptions after initial coverage is exhausted but before catastrophic coverage begins.

“It’s a reform that will make prescription drugs more affordable for millions of seniors and restore a measure of fairness,” Obama said.

The drug companies’ investment would reduce the cost of drugs for seniors and pay for a portion of Obama’s proposed revamping of health care. The deal was struck with Sen. Max Baucus, D-Mont., the chairman of the Senate Finance Committee, as well as the White House.

The president was joined Monday in announcing the deal by Barry Rand, head of the senior citizens’ advocacy group AARP, as well as Baucus and Sen. Chris Dodd, DConn.

“This is an early win for reform,” Rand said.

Under the agreement, part of the $80 billion would be used to halve the cost of brand name drugs for Medicare recipients when they are in a coverage gap of the program. AARP, which represents 40 million older Americans, has long lobbied to eliminate that coverage gap completely.

The deal would affect about 26 million low- and middle-income recipients of the program’s enrollees, AARP said. It would apply to brand name and biologic drugs, but not generics, the group said, and likely take effect in July 2010, assuming drug overhaul legislation becomes law.

Under Medicare’s Part D prescription drug program, recipients pay about 25 percent of the cost of their drugs until they and the government have paid $2,700.

At that point, beneficiaries must cover the full cost of drugs until they have spent $4,350 from their own pockets. When they reach that amount, Medicare’s catastrophic drug benefit takes effect, and recipients only pay 5 percent of their drugs’ costs until the end of the year.