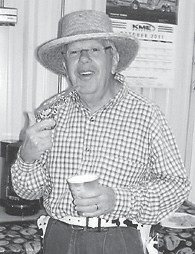 Jim Craft was going to shoot himself, according to Ermine Center correspondent Lizzie M. Wright. He was visiting the Colson Center.

Hey, Ermine seniors are trying to get moving again. You know what? We had a Halloween party at the new Recreation Center and we had a great time.

All the centers were there, but I’ll bet they didn’t have any more fun than the Ermine Center did. I can say that because I won two gifts, and I had fun too. We had 37 seniors and three workers attend.

Last Thursday we had Golden Arts at our center, and most of the other centers entered. Joe Bentley won two blue ribbons, that’s first place. I think his wife Doris really won, but we gave Joe the credit so he wouldn’t pout.

Also, Colene Hart won three blue ribbons and one for second place. We enjoyed looking at all the pretty quilts and things the seniors brought in.

Nov. 3, which is on Thursday, we are going to Hazard to the Arts Show there at the college, and guess where we’ll eat? Yep, at the Golden Corral again (I hope).

We’re also planning on a shopping trip somewhere. I don’t know yet where we will go, but we’ll have fun wherever. 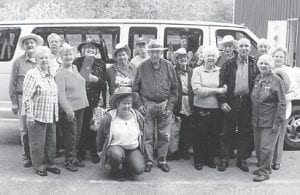 Seniors from the Ermine Center pose for a photograph while visiting the Colson Center.

Don’t forget to run your clocks back one hour Saturday night. I like that because I get another hour’s sleep in the morning.

We’re expecting some new faces this week at our center. Come on, you people. We will surely welcome you.

Say, Thanksgiving is coming up in three weeks, so the turkeys should start hiding before they get caught as most everyone fixes turkey that day. I know I will as I’m having company.

Then it’s not long until Christmas, so we’ll get the Christmas tree put up and decorated. We have a beautiful tree and ornaments. I hope no one will take any this year as we lost some off of our tree last year.

My buddy has been sent to Bristol to the hospital for rehab. I sure hope they can help him as we miss him and his wife when their seats are vacant.

Judith Vermillion and I have played a game for three or four years called “Got You.” She sneaks up on me and says, “Gots You!” I tell them she is the sneakiest woman in Whitesburg, but she’s not really.

I hope to see you all at Ermine Center this week so come on in and see what’s going on. I hope I have more to write about next time.

So all stay well, good, and pretty. God bless until next time.