Principal Wendy Madden Rutherford and others from Letcher Elementary School are pictured in Frankfort.

Our good friend Junior Kuracka passed away Saturday and his funeral was Monday, April 2. He was such a blessing to all of us at the rec xenter and Letcher County Senior Citizens.

We all loved his humor and I loved talking to him and his wife every morning. He wore a back brace for over a year and would still try his best to walk around the walk track. I loved his perseverance.

I also forgot to mention Wilma Ritchie was involved in the Rook tournament last month.

The Camp Nathanael field trip is scheduled for the 19th. I’ve never been with the seniors, but everyone says that it’s a wonderful trip. They also have nothing but good to say about the food they serve. 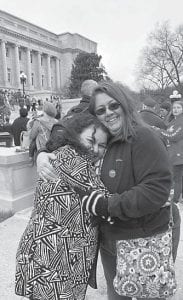 We had to memorize Bible verses and that entitled us to be a camper for a week. My sisters and brother all loved it.

They had a swimming pool and that’s what we were all crazy about. But they also did all kinds of outdoor activities, such as baseball, volleyball, dodge ball, etc.

Richard Bowers was a young man then and he and his wife Leah were the music directors. They played every instrument you could think of and some that you would never think of. 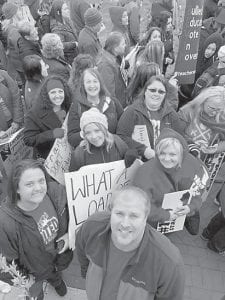 Marchers from Martha Jane Potter Elementary and other schools protest the pension bill in Frankfort.

I was amazed as he played a screen door spring, a washtub made into a bass guitar, goblets filled with water, you name it they played it.

Leah taught piano lessons and was our pianist at Letcher Independent Baptist Church. Theresa Caudill Bentley was one of her former students. They have both passed away now, but their influence on others will live on forever.

I was reading on Facebook where Judy Howard Greene’s daughter, Tabitha, is having major problems with blood clots in her lungs and she is asking everyone to keep them in your prayers. Billy Hatton said she is home now but Judy is having to stay with her.

Another friend of mine, Georgia Hall, had a really bad fall at home and had to have rehab at Shelby Valley. She did get to come home Saturday but now has bronchitis.

I’ve also been following on Facebook all the protests that are taking place because of what is being considered for all the people who are on the State Retirement Plan, such as myself. Monday, April 2, there was no school in Letcher County so our teachers were able to attend the rally going on in Frankfort.

Our state representative, Angie Hatton, is Oma Hatton’s granddaughter. She has been behind us 100 percent and posted a lot of pictures from the rally in Frankfort. This is one of the posts she shared.

“More Letcher and Pike County folks making their voices heard at the Capitol today. So proud of you guys! You are making a difference!”

The pictures this week are ones that were shared on Facebook from that rally.

Ending here once again with Oma’s weekly plea, try your best to be in church somewhere this Sunday and I say if your church has services Sunday night and throughout the week God would want you there then, too.

There is also a revival going on this week at Millstone Missionary Baptist Church with Eddie Street, and I’m sure Preacher Bill Craft would love to see you there.