Separating the myths from facts about Thanksgiving 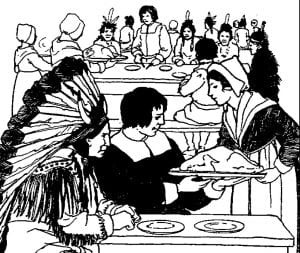 Thanksgiving has few historical ties to the original 17th-century celebration, according to Dr. Mark Miller, professor of history at Roanoke College in Virginia.

Take the first Thanksgiving celebration in Plymouth, Mass., back in 1621, for instance. It has been depicted as a friendly gathering between the Pilgrims and the Indians. But Miller says that the Pilgrims could not possibly have been attendants of the earliest Thanksgiving feast because the term “Pilgrim” was not even invented until the 1830s.

“During the pre-Civil War period, Northerners were in search of a counterpart image to that of the Southern settlers of Jamestown,” says Miller. “This led to the name ‘Pilgrims,’ which described the first group of Englishmen to live in the North.”

Contrary to popular belief, Miller says that the original guests of the 1621 feast were not “Pilgrims,” but more appropriately called “Saints.” The relationship between the Saints and the Indians has also been distorted through the years. The European settlers were really quite frightened of the wild new world, including its native inhabitants.

“The Europeans thought the Native Americans were a lost Israeli tribe that had been blown off course and landed in America,” says Miller. “They thought the tribe arrived as civilized men and women, but became savages after living in the wilderness. For fear of contact with the savages, laws were enacted which forbade European settlers to touch or look at the Indians.”

The Civil War also played a predominant role in the timing of the celebration, according to Miller. The original harvest was likely held in late summer to early fall, following the final rush of fieldwork. However, in 1864, Abraham Lincoln, then president of the North, called for a day of thanksgiving in November. It wasn’t until the 20th century that Thanksgiving was celebrated in Southern states.