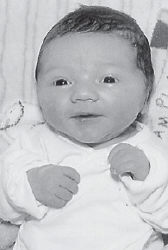 Noah Ezra Anthony Watts was born Sept. 4 to Brandon Leo Ezra and Shannon Watts of Hamtramck, Mich. He is the grandson of Ronnie and Frances Watts of Warren, Mich., and Jack and Carol Brown of Detroit, Mich. His great-grandparents are Martha Watts of Garden City, Mich., formerly of Eolia; the late Ezra Watts of Hallie; and the late Leo and Mary Wozniak of Hamtramck, Mich.