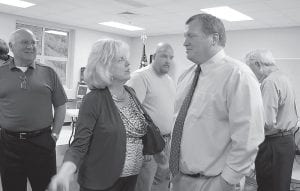 Tony Sergent, who will assume the position of Letcher Schools Superintendent on July 1, talked with retiring Supt. Anna Craft after Sergent was hired to fill the post on June 5. (Eagle photo)

Letcher County Schools will have a new leader in July.

Tony A. Sergent was selected during a special meeting June 5 by the Letcher County Board of Education to become the next superintendent of Letcher County Schools.

“I’m honored that the board chose me for this position,” said Sergent, “I will work as hard as I can for this district.”

Sergent is now serving as the school district’s director of Continuous Instructional Improvement Technology System and will begin a four-year contract as superintendent on July 1. Sergent will be paid an annual salary of $99,112.

Sergent told The Mountain Eagle that improving student achievement will be his top priority.

He taught math at Whitesburg High School and Letcher County Central High School from 1988 to 2010. He was WHS head football coach from 2000 – 2004. He was the principal of Fleming-Neon Elementary School for two years before serving as a district administrator.

Sergent is a lifelong resident of Letcher County. He was graduated from Whitesburg High School. He earned a bachelors of science degree and a master’s degree in education with an emphasis in math from Morehead State University.

Sergent and his wife, Annette, have two children, Emily and Sam.

The board officially voted to hire Sergent after members emerged from a closed session that began at 6:03 p.m. and ended at 6:33 p.m.

Board Chairman Robert Kiser did not give a specific reason for why a closed session was necessary other that saying it was to discuss litigation, personnel and/or property. Since executive session and a motion to hire a superintendent were the only two items on the agenda, one can only assume that the board met in closed session to discuss whom to hire as the new superintendent.

Other than unanimously voting to hire Sergent, board members made no comment about him or any of the other six candidates who were recommended for consideration for the job by a special screening committee. A total of 31 men and women had applied for the position.

The school board declined to release the names of any of the applicants for the job to The Mountain Eagle, however The Eagle learned that Sergent was one of two candidates interviewed for the position on May 31. The other was Sandy Hogg, the school district’s director of special projects. Hogg also attended the meeting on June 5.

Daniel Click of Ervine and Darrell Witten of Clarkson were to be interviewed, but canceled their interviews. The seven persons considered for the job included the superintendent search committee’s five recommendations and all applicants who reside in Letcher County.