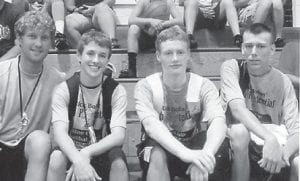 I hope everyone had as grand a weekend as we did. Our picnic was Sunday, and we had several family members present who had never attended before.

All my brothers and sisters were here except Henry Warren and Anna Lea, even some of Red’s family came. We had a good crowd with lots of food, and everyone seemed to really enjoy themselves. The kids played and the grownups just yakked and caught up on all the news. 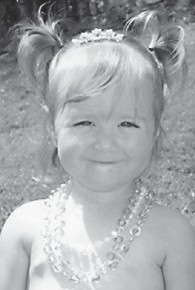 TWO YEARS OLD — Carly Shae Stamper celebrated her second birthday August 14 with a Tinker Bell party at Cowan Community Center. She is the daughter of Derrick Adams of Letcher and Brittany Stamper of Whitesburg, and has a brother, Hayden Adams, who will turn four August 22. She is the granddaughter of Angela and Kevin Stamper of Whitesburg, Keith and Diane Adams of Letcher, and Sandra and Robert Orcutt of Letcher.

I may have missed some and if so I’m sorry. Just let me know and I will get your name in the paper sooner or later.

Red had a good birthday and got lots of cards and calls. Bill and Redia brought our lunch and ate with us. I bought a cake and Catharine came by and brought him a pie (with no sugar) from Perkins, and Richard and Georgia came over and had cake and coffee with us.

We only had one sleepover houseguest this year. Sarah slept here, and the others got rooms at nearby motels, but they did spend lots of time here and I got to cook for them.

I have to admit though, the girls kept everything washed up, mostly pots, pans and silverware. I used my best china (throwaways).

I’ve had a couple of pretty busy days just mostly putting away picnic and other items. I did pick, fix and put up two-gallon bags of beans in the freezer.

The last of our company, Ron, Johnell and Sarah, left around 1 p.m., Monday. It’s so quiet and lonesome after they all leave.

Red received more birthday cards today, one from his niece Carleta Adams, one of our “adopted daughters”, and one from a very special person. Kathy, he sends his sincere thanks and I wish you could have seen his face, so surprised and as though he could not believe. My heartfelt thanks also.

We got a most interesting call from our cousin Bill Sergent in North Carolina, and also a most welcome call from Dorothy Potter in South Carolina.

Richard and Georgia stopped by after church and had pie, cake and coffee with us and took home some good old tomatoes, which saved me from having to make juice. It’s not a huge job but I’m tired.

I called Sarah Belle, and she had her first chemo treatment and said all went well. I sure hope it will always go well.

I also called Henry Warren to let him know what was going on with Sarah. He’s having trouble with his knees, says sometimes he can hardly walk. This Sergent family sure enough isn’t what it used to be and we sure aren’t getting any younger.

Red got the ground ready for our late mustard patch. And I have just been doing a whole lot of nothing. I did measure some pants for Bill’s store, and he unloaded some boxes of clothes in our garage while he was moving.

Well, Rose, it must be something in the air. I took a tumble Sunday as I was leaving the park and fell on both knees. Now I have two of the most colorful legs ever. Pretty soon they will be multicolored.

I hope this finds all well and do hope your summer has been, and will still be, a really great one. I’m sure some schools are now in session and others will be starting soon. So please keep and eye out for the little ones and keep them safe.

Red got another birthday card today that I have to display, and I am just about out of room on the table. If he gets more I will have to start another display.

I’m through now! Be well, be safe, peace, love and prayers be with you always.