By FORREST BERKSHIRE
The Kentucky Standard 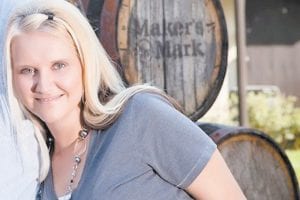 Crystal Rogers, the Bardstown, Ky., mother of five who went missing in July 2015, is the subject of a continuing six-part TV series airing Saturdays on the Oxygen Network.

The search for evidence that could point to Crystal Rogers’s whereabouts turned up fruitless in its third hour Saturday of a nationally broadcast cable TV show.

“The Disappearance of Crystal Rogers” aired its second episode on Oxygen Network over the weekend, at its conclusion reaching the halfway point of the sixhour series.

The second episode focused on the possible role played by former Bardstown Police Officer Nick Houck and a search for Rogers’s remains at Melody Lake.

The episode also delivered a disappointing yet not wholly unexpected answer it had left hanging the week prior as to whether police had missed any forensic evidence when they processed Rogers’s car.

A lab could find no DNA evidence on the carpet of the trunk of Rogers’s car, its director reported to the hosts of the show. The forensic search was a key part of the first two-hour episode and local police were criticized by the show’s experts for what they said appeared to be an incomplete search. 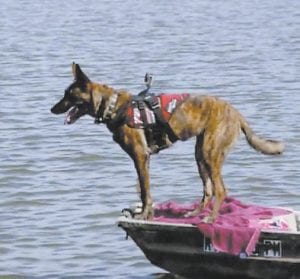 A cadaver dog was seen on a lake during part two of “The Disappearance of Crystal Rogers” on Oxygen Network.

The results were not unexpected, because police and prosecutors have said the show had not turned over any new evidence to them. Much of the show’s footage was shot nearly a year ago.

But that did not prevent local investigators from weathering a week of intense criticism on social media and accusations of incompetence and corruption. The Nelson County Sheriff ’s Office is in charge of the Rogers investigation, and the lead detective on the case, Deputy Sheriff Jon Snow, has said items were collected from the car, but he is not at liberty to discuss any case specifics.

The show is cast as an investigation into Rogers’s disappearance by an “investigative journalist” and a retired homicide detective from Washington, D.C.

The episode also spent a large portion of the segment on a search at Melody Lake, a large body of water between New Haven and Holy Cross. Sherry Ballard said she had wanted the lake drained.

Police have searched the lake numerous times, but the show’s hosts and Rogers’s family said cadaver dogs trained to find human remains had indicated a body was in the lake. A cadaver dog was shown indicating remains and a dive team from New York was brought in and searched that area.

The team found no remains after searching the muddy bottom, and the dive team’s leader said to search the whole lake would be impractical.

“This lake would take months,” he said.

The show ended with the hosts theorizing that the May 2013 murder of Bardstown Police Officer Jason Ellis, the double murder in April 2014 of mother and daughter Kathy and Samantha Netherland, Rogers’s disappearance and her father Tommy Ballard’s apparent assassination in November 2016 were all connected.

“I think at least most of these murders, are connected in some shape form or fashion. So let’s connect the dots,” the retired homicide detective, Dwayne Stanton, said.

Police and family of some of the victims have repeatedly said the murders do not appear to be related.

The show does not show McCubbin’s answer, assumedly that question will be answered in the third episode, but the Bardstown Police do not operate on the partner system.

Scenes from upcoming episodes showed the hosts and the forensics expert who struck out on Rogers’s car examining a white car that might be the car of the Houcks’ grandmother, a white Buick that has come to the attention of police investigating Rogers’s disappearance.