Serve this on a hotdog bun 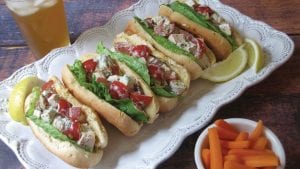 This photo shows BLT chicken salad with basil dressing sandwiches in New York. From a recipe by Sara Moulton.

Chicken salad, that summertime classic, often suffers from Chewy Chicken Syndrome, a pitfall that requires a tightrope walk to avoid.

You want to build the recipe around white meat chicken — the perfect foil for its mayonnaise-based sauce — but you don’t want to overcook it, an easy thing to do given white meat’s leanness. (And if you do happen to overcook it, you might as well kiss it goodbye. It’ll end up about as tender as a pencil eraser.)

Accordingly, this recipe for Deluxe BLT Chicken Salad Sandwiches With Basil Dressing mimics the cooking process called sous vide to guarantee the chicken turns out tender. Without going into a lengthy explanation, let’s just say the premise of sous vide is to cook the item at a temperature no higher than the one at which you want it to end up. That way it can never be overcooked. In this case the outer limit for the internal temperature is 165 degrees, the heat at which you can be sure that any bacteria have been killed.

Here the chicken is cooked in chicken broth, which deepens the flavor of both the chicken and the broth. You’ll start by heating the broth to 170 F, not 165 F, because the temperature drops quickly with all the chicken in there. Then cover the pan and pull it off the burner, allowing the chicken to cook gently in the lingering heat of the broth. (To make sure you don’t undercook it, cut into the thickest piece of chicken after it rests for 20 minutes and, if necessary, reheat it briefly to finish the process.)

What puts this chicken salad over the top? Salting the tomatoes to remove excess water and make them more tomato-y and pureeing the basil leaves in a food processor to make them more basil-y. Lastly, we borrow one of the features that makes a New England lobster roll so magnificent — serving the chicken salad in a buttered, toasted hot dog bun.

In a medium saucepan
combine the chicken with
the broth and heat the pan
over medium heat until it
registers 170 F. Remove the
pan from the heat, cover
the pan and let it stand
20 minutes. (Cut into the
thickest part of the thickest chicken breast and if
you see any pink reheat the
chicken briefly.) Transfer
the chicken to a bowl and let
it cool. When cool, cut into
1/2-inch cubes. Strain the
broth, cover and either chill
or freeze it for future use.
Meanwhile, sprinkle the
tomatoes lightly with salt
and let them stand for 15
minutes.
In a large skillet cook the
bacon over medium heat
until crisp, about 5 minutes and transfer to paper
towels to drain. When cool,
crumble.
In a food processor combine the mayonnaise, basil,
lemon zest and juice and
puree until smooth. Add a
little water if the dressing is
too thick to pour.
Using a serrated knife,
slice off and discard the side
crusts of the hot dog buns.
Brush the cut sides with the
butter. In a large nonstick

skillet toast the buttered
sides of the hot dog buns
over medium heat until they
are golden brown.
Using paper towels gently pat dry the tomatoes. In
a large bowl combine the
chicken, dressing, tomatoes
and bacon; stir gently just
until combined.
To serve: Put a piece of
lettuce inside each toasted
bun and mound the chicken
salad on top.