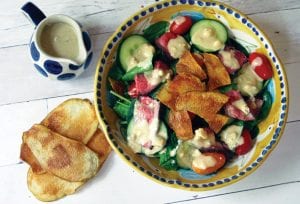 This photo shows a warm steak and potato chip salad with blue cheese dressing in New York. This dish is from a recipe by Sara Moulton.

In honor of Father’s Day, I’ve conjured up a recipe featuring an arsenal of steakhouse delights, starting with steak itself and including potatoes, spinach and blue cheese. But I’ve prepared and combined these ingredients in a way that’s slightly healthier than usual, namely in a salad. The bulk of it is given over to spinach, tomatoes and cucumbers. It’s topped with warm sliced steak (only a little over 3 ounces per person), blue cheese dressing and oven-baked (not deep-fried) potato chips.

Given that the classic steakhouse steaks — strip, filet mignon and porterhouse — are so doggone pricey these days, this recipe features a chuck steak. Increasingly available at your local supermarket, chuck steak is cut from the shoulder. It’s tougher than the others I mentioned but still plenty flavorful. And if you’re careful to cook it no more than medium-rare and then slice it very thin against the grain, it won’t seem chewy at all.

The oven-baked potato chips are a snap to make and a heck of a lot less messy than the deep fried kind, especially if you own a mandolin and some parchment paper. The mandolin allows you to slice those taters paper-thin (be sure, though, to use the guard when you slice them!), and the paper keeps them from sticking to the sheet pan, which eliminates the need for a lot of oil. Still, you want to be careful not to let them become too brown because they’ll begin to taste burned. (It’s OK to remove them from the oven when they have a few paler spots.) Fair warning: These chips can be addictive, even though they’re not deep-fried.

I promise that your man will be able to dig into this dish with no insult to his masculinity … and the rest of the family will be thrilled, too.

Preheat the oven to 350 F. Line two sheet pans with parchment and brush the parchment lightly with some oil. Slice the potato lengthwise 1/8-inch thick, preferably using a mandolin, and arrange the slices in one layer on the sheet pans. Brush the tops of the slices lightly with oil and working with one sheet pan at a time, sprinkle the potato slices lightly with salt and bake them on the middle shelf of the oven until they are golden brown, about 20 to 25 minutes, removing the chips to a paper towel lined plate as they become golden. (They may not all brown at the same pace.) Do not let them get too dark in color; it is OK if they have a few lighter patches.

In a bowl whisk together the vinegar, lemon juice, Worcestershire sauce and garlic. Add the oil slowly in a stream, whisking, until all of it is added. Whisk in the sour cream and gently stir in the blue cheese. Add salt and pepper to taste.

In a large skillet heat the oil over high heat. Add the steak, seasoned on both sides with salt and pepper; cook it for 5 minutes a side for medium-rare. Transfer the steak to a plate and let it rest for 8 minutes before slicing it.

To serve: Add any juices from the steak plate to the blue cheese dressing. Slice the steak very thin at an angle across the grain. In a large salad bowl combine the spinach with the tomatoes and cucumber slices, add some of the dressing, reserving a little to drizzle on top and toss the salad well. Mound the salad on each of six plates, top with the steak slices and the potato chips, broken into large pieces and drizzle each portion with a little more dressing.