Served with a Navajo code talker 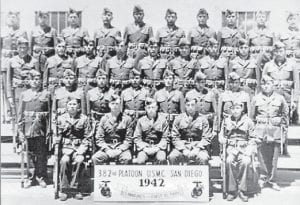 The first detachment of Navajo Communication Specialists poses for this group picture upon completion of their basic training program in May, 1942.

During the early months of World War II, the Japanese intelligence experts broke every code the U.S. forces devised. They were able to anticipate American actions at an alarming rate.

They sabotaged messages and issued false commands to ambush allied troop. The military needed a better way to communicate.

In the days of World War I, our military trained Native Americans to transmit messages in Europe to use their language in code during the final big German push of the war. Within 24 hours after Native American language was pressed into service, the tide of the battle had turned. In less than 72 hours, the Germans were retreating and the allies were in full attack.

These soldiers are now known as ‘code talkers.’

Early in 1942, the military started training Native Americans from the Navajo reservation who were fluent in their difficult language to operate a portable radio unit on the front lines. Not only memorizing the Navajo code, but learning other communication methods as well.

Once trained, the Navajo code talkers were sent to Marine divisions in the Pacific Theater where they quickly gained a distinguished reputation for their remarkable abilities.

Navajo was an attractive choice for code use because few people outside the Navajo themselves had ever learned to speak the language. The Japanese went nuts trying to break the code.

The Navajo code talkers were commended for their skill, speed, and accuracy accrued throughout the war. At the Battle of Iwo Jima, the 5th Marine Divi- sion signal officer had six Navajo code talkers working around the clock during the first two days of the battle. These six men sent out and received over 800 messages, all without error.

The signal officer later stated, “Were it not for the Navajo, the Marines would never had taken Iwo Jima.”

In 1948 when I was assigned to Lackland Field, Texas, as a printer, I was made barracks chief because of my three years of service.

I became friends with a Native American who had reenlisted in the Army Air Corps after his tour with the Marines. He was a radio operator at Kelly Field, a mile from Lackland Field, living in our barracks. We had a lot to talk about, as I also had went to radio school. Everyone called him ‘Chief.’

When I received my top secret clearance, I saw reports of the code talkers. After the war, the Navajo code talkers returned home as heroes without a hero’s welcome. Their code had been so successful, it was considered a military secret too important to divulge.

They remained silent heroes until more than two decades later. Even after declassification of the code in 1968, it took many years before any official recognition was given.

In 2001, nearly 60 years after they created their legendary code, the Navajo code talkers finally received well-deserved Congressional Medals of Honor.

Now, only a few of the silent heroes remain.

After I found out the ‘Chief’, my good friend that I spent a lot of time with for two years, was one of the Navajo code talkers, I could not talk about it.

The ‘Chief’ never once said anything to me about his duty in World War II.

I found out many years later that my good friend was portrayed in the move about the code talkers serving in the Marine Corps in the Pacific Theater during World War II.