Services are held for Carolyn Walters 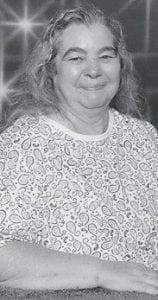 Carolyn Sue Walters, 60, died May 2 at her home on Elk Creek.

Funeral services were held May 4 at the Mount Olivet Old Regular Baptist Church at Blackey. Burial was in the Walters Cemetery on Elk Creek.

Everidge Funeral Home had charge of the arrangements.