Services are held for Doris Williams 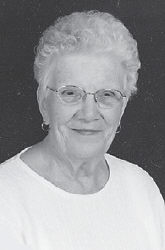 Doris Annie Buddle Williams of Whitesburg, Kentucky, passed away on January 9, 2009 at Whitesburg ARH. Doris was born in Abbots Ripton, England on March 4, 1923 to Charles and Susan Buddle. She was married to James M. Williams Jr. when he was serving in the U.S. Army Air Force during World War II. Doris was preceded in death by her husband James, her parents, her brother Cecil Buddle and grandson John Patrick Sanders.

Doris professed her faith in Christ on May 19, 1959 and was a member of the McRoberts Missionary Baptist Church.

Throughout her life, Doris made friends wherever she went and she will be missed.

Funeral services were at 11:00 a.m. on Tuesday, January 13, 2009 at the Letcher Funeral Home in Whitesburg with burial following at Green Acres Cemetery, Ermine. In lieu of flowers, donations may be made to the Whitesburg ARH Auxiliary.