Services are held for Esther Corrello, 92 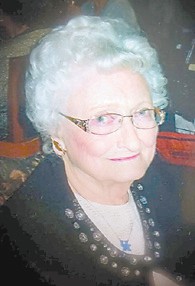 Esther Kathyleen Hall Corrello, 92, died December 4 following a brief confinement at the Hosparus Inpatient Center in Louisville. A native of Letcher County, she resided for the last years of her life at Brownsboro Park Senior Living Apartments in Louisville.

Born in Whitesburg, she was the youngest of nine children of Alvin and Mary Franklin Hall.

Mrs. Corrello was a member of 70 years’ standing at Graham Memorial Presbyterian Church in Whitesburg, where she was recognized as a Life Member of the Presbyterian Women. She was a Sunday School teacher and Cub Scout den mother, as well as volunteer and spaghetti cook for countless church and community events.

She loved the outdoors, handicrafts, gardening and the preservation and display of her fruit and vegetable produce. For years she created, in the fellowship of her Homemakers Club friends and others, beautiful quilts, paintings, baskets, and other artifacts. Just eleven days before her death she shared her quilts and other handiworks with fellow residents of her community at Brownsboro Park.

Mrs. Corrello was the mother, from her first marriage, of the late James Earl Mohn whose widow is Rebecca “Becky” Boggs Mohn of Shelbyville, and Dan C. Mohn and wife Sharon, of St. George Island, Fla.

Her second marriage was to the late Frank Corrello in 1956. Their daughter is Myra Lynette Corrello and husband Tim Webb of New Orleans.

She was preceded in death by a granddaughter, Kristen Mohn Dellaporta.

Funeral services were held December 8 at Graham Memorial Presbyterian Church in Whitesburg. Commital followed at the Evergreen and Williams Cemeteries in Whitesburg.