Services are held for Marjorie Collier 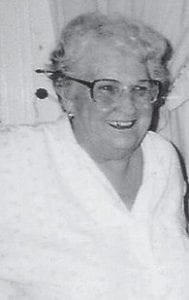 Funeral services for Marjorie Marie Collier, 84, were held February 15 at Everidge Funeral Home. Burial was in the Thornton Cemetery.

A resident of Letcher Manor Nursing Home, she was the daughter of the late Sam and Martha Jane Polly Hall, and the widow of William Oscar Collier.

Mrs. Collier was a member of the Millstone Missionary Baptist Church and enjoyed fishing and ginseng hunting.