Services are held for Nora Williams 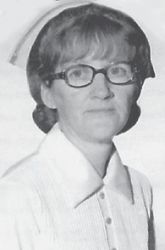 Born in Letcher County, she was a daughter of the late Jesse Leroy and Sadie Lynn Helton Carter.

Mrs. Williams was a nurse, and a member of the Church of Christ at Hemphill.