Services are held for Ruth Smith, 82 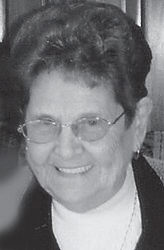 Born in Letcher County, she was a daughter of the late T.R. and Maggie Meade Collier. She was married to the late Mayo Anderson and after his death married the late John O. Smith. She was a sister of the late Hillard Collier and Daniel Collier.

Mrs. Smith was a member of the First Baptist Church in Whitesburg.

Funeral services were held August 14 at the First Baptist Church in Whitesburg. Burial was in Green Acres Cemetery at Ermine.