Services are held for Sylvania Lucas 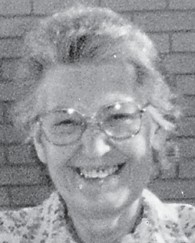 Born in Whitesburg to the late John and Rebecca Shepard Halcomb, she was the widow of Estis ‘Luke’ Lucas, and a sister of the late Charles Halcomb and William Halcomb.

She was retired from Mercy Hospital after 25 years of service.

Funeral services were held November 21 in Tiffin. Burial was in Seneca Memory Gardens.