Services are held for Verna Nease 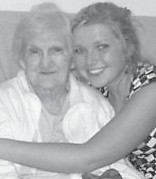 Funeral services for Verna Nease, 89, of Colson, were held Tuesday in the chapel of Everidge Funeral Home in Whitesburg.

Born in Knott County, she was the mother of the late Shelby Wayne Nease and the wife of the late Bradley Nease.

Burial was in Henry Adams Cemetery at Little Rock Drive on Colson.