Services are held for Viola Moore 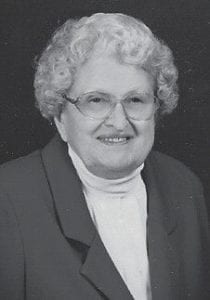 Funeral services for Viola Combs Moore, 95, of Whitesburg, were held August 25 at Everidge Funeral Home. Burial was in Green Acres Cemetery at Ermine.

A daughter of the late Henry and Pollie Roark Combs, she was born at Rockhouse. She died August 22. She was a sister of the late Eunice Combs Taylor and Lincoln Combs, and the grandmother of the late Deborah Kaye Romine and John Allen Romine.

Mrs. Moore was an elementary school teacher for 26 years in Letcher County prior to becoming a social worker for the Kentucky Public Assistance Office. Her teaching career began at Marlowe School, operated by Marlowe Coal Company for the children of the coal miners living in the coal camp. Her teaching contract required her to not marry, and she and her sweetheart since childhood eloped in 1934. She and her husband, the late Ferdinand Moore, a former Mayor of Whitesburg, were owners of the Moore & Craft Funeral Home.

Mrs. Moore taught Sunday School in the junior department and the special needs class at the First Baptist Church for many years. She had been a member of the WMU, Young at Heart and Adult II class. When in Louisville, she attended St. Francis in the Fields Episcopal Church. She was active in the Pine Mountain Chapter of the Daughters of the American Revolution, Whitesburg Lions Club, Whitesburg Woman’s Club, and Eastern Star Hester Chapter No. 54, and served on committees for the Kentucky River Area Development District in Hazard.

The family suggests gifts to her memory be made to First Baptist Church Family Life Center, 170 Madison Ave., Whitesburg, KY 41858.