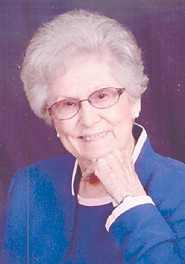 Funeral services for Chelsie Hogg Reynolds, 98, will be held at 1 p.m., Thursday, at Letcher Funeral Home. Visitation will begin at the funeral home at 6 p.m. today (Wednesday). Burial will take place in the Hall Cemetery at Ermine.

A daughter of the late Burnett and Bertha Shepherd Hogg, she was born at Roxana. She died January 7.

Mrs. Reynolds was a member of Millstone Missionary Baptist Church and Mayking Homemakers Club, and had been a Sunday School teacher at Whitesburg First Baptist Church for more than 25 years. She attended Whitesburg High School and Stuart Robinson School.

In lieu of flowers, memorial contributions may be made to Millstone Missionary Baptist Church in care of Bill Craft, 191 Cabin Creek Road, Whitesburg, Ky. 41858.