Services are planned for Mary Hammond 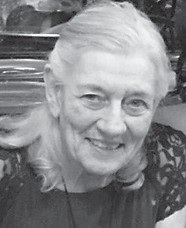 Funeral services for Mary Hammond, 94, will be held at 1 p.m. today (Wednesday) at Graham Memorial Presbyterian Church in Whitesburg. Graveside services will be held immediately after.

A daughter of the late Louis Takacs Sr. and Mary Babos Tackacs, she died September 6 in Jacksonville, Fla., after a brief illness.

She was the widow of Wilgus Bruce Hammond, and was also preceded in death by seven siblings.

She was the first of her family to graduate from high school, and was a member of the Honor Society in the Lynch High School Class of 1942.

Mrs. Hammond was a member of the Ladies’ Auxiliary and was employed by the Bank of Whitesburg as a bookkeeper, and later moved to Lexington and worked for the University Press at the University of Kentucky.

She was retired from the Collier County Property Appraisers office, and later moved to Jacksonville, Fla.

Mrs. Hammond attended Hodges Blvd. Presbyterian Church and served as the Presbyterian Women’s’ Circle Leader from 2000 to 2003. She supported the Baptist Children’s Home with prayer and donations.

Friends and family are invited to join the family at the Pine Mountain Grill after the graveside services for a time of fellowship and sharing of memories.