Services are set for H.D. Caudill 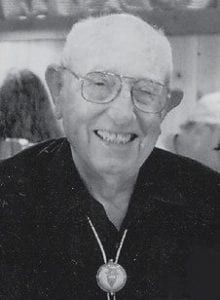 Funeral services for Hendricks D. “H.D.” Caudill Jr., 84, of Jeffersontown, will be held t 11 a.m. Thursday at Letcher Funeral Home. Burial will be in the Solomon H. Whitaker Cemetery at Carcassonne. He was a son of the late Hendricks D. (H.D.) and Anna Dixon Caudill.

He was past president of the Midwest Chapter of the 36th Infantry Division, and a member of the Military Order of the Purple Heart, Disabled American Veterans, Veterans of Foreign Wars Post 6376, San Antonio and Dallas Chapters of the 36th Infantry Division. He was a life member of the National Division, American Legion Zachary Taylor Post, the American Legion Order of the French Croix De Guerre, and VFW National Children’s Home.

He was the father of the late Ken Douglas Caudill.