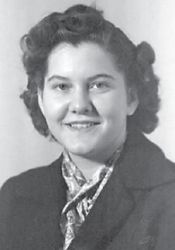 Funeral services for Ava Jean Baker, 76, were held August 1 at the Church of Christ at Jackhorn. Burial was in the Baker family cemetery at Millstone.

A daughter of the late Sam and Flora Quillen Hall, she was born at Deane. She died July 29 at her home at Neon.

Mrs. Baker was a member of the Jackhorn Church of Christ for more than 45 years. She was the widow of Henry Baker and the mother of the late Sonnie Baker.