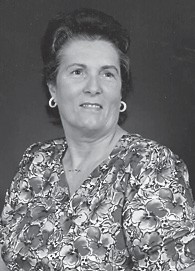 A daughter of the late Ed and Esta Collins Sexton, she was the widow of Billy Wayne Adams.

She was the mother of the late Ricky Adams and a sister of the late Bennett Sexton, Violet Benton, Josie Collins, Hazel Sexton and Susie Edie Sexton.

Funeral services for Mrs. Adams were held February 28 in Whitesburg. Burial was in the Sexton Cemetery at Sandlick.