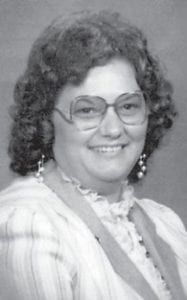 Born in Whitesburg to the late William Garfield and Lula Collins Baker, she was the widow of her second husband, Durward Neikirk Jr., and a sister of the late Renfro Baker.

Mrs. Neikirk died at her home in Lexington on June 5. She owned and operated her own coal businesses throughout eastern Kentucky for several years, and was a member of the Millstone Missionary Baptist Church in Thornton.

Surviving are her son Stevenson Combs and his wife Lisa of McKinney; two daughters, Janet Halland and her husband Eddie of Lexington, and Clashia Black and her husband Ronald of Somerset. A brother, Brice Baker of Whitesburg, and a sister, Artie Large of Hammersville, Ohio, also survive.

Burial was in the Tanner Cemetery at Mount Sterling.