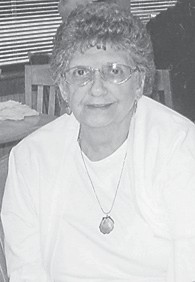 Edith Majority, 86, died January 27 at her home in Knoxville, Tenn.

Born at Typo, she was a daughter of the late A.P. and Effie Williams and was married to the late James Majority. She was the mother of the late Paul Gene Majority and a grandmother of the late David Allen Majority, and was also preceded in death by four sisters and three brothers.

Funeral services were held January 30 in Knoxville. Burial was January 31 in the Lynnhurst Cemetery.