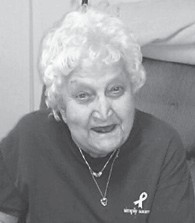 Edna Watts Sexton of Randleman, N.C., formerly of Hallie, died May 21 at the Randolph Hospice Care Center in North Carolina.

A daughter of the late Blaine and Eva Watts, she was the widow of James Edward Sexton.

Funeral services were held May 24 at the Cedar Grove Old Regular Baptist Church.