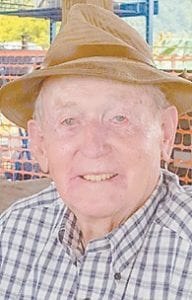 Born in Pound, Va., to the late Oliver W. Meade and Dessie Bauguess Meade, he was the widower of Leora Meade.

A kind and gentle man, he worked 37 years for Centre Equipment in Midvale, Ohio, and for several years as a master mechanic for Fisher Brothers. He retired as owner of Hilltop Equipment at the age of 84.

Mr. Meade was a member of Rockhill Baptist Church and the International Union of Operating Engineers for 60 years.

Surviving are a son, Tony and Mary Zimmerman Meade of Wellsburg, W.Va.; three daughters, Kathy Meade and Kim Beedle of Lincoln, Neb., Cynthia Arnold and John Newsome of Alpine, Tex., and Kathy Pillar and husband Miles of Dover, Ohio; two grandchildren, Michael and Bebe Pillar; five sisters, Peggy, Nell, Louise, Judy and Cassie, who was a caregiver for him for more than three years; and five brothers, Abe, Jack, Bill, Rondall, and Phillip.

Funeral services for Mr. Meade were held March 8 in Ohio. Interment was in the Fort Steuben Burial Estates in Wintersville, Ohio.