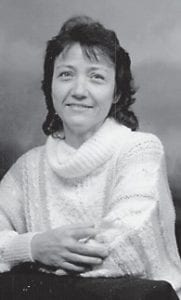 Funeral services for Frances Dixon, 65, of Cornettsville, were held March 8 at Letcher Funeral Home in Whitesburg. Burial was in the Campbell-Halcomb Cemetery at Linefork.

A daughter of the late Earl and Audrey Eldridge Halcomb, she died March 5 at Little Leatherwood.

She was the widow of Allen Wayne “Cat” Dixon.