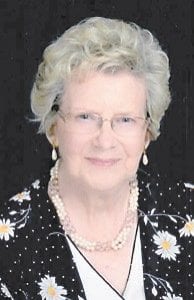 Born in Whitesburg to the late Dorothy Adams Frazier and Boone Frazier, she was preceded in death by her husband of 67 years, Alex L. Hall; her son, Alex Scott Hall; an infant brother; and two sisters, Phyllis Sturgill and Shirley Breeding.

Mrs. Hall was a longtime member of the Sturgis Church of Christ. She was a graduate of Midway College, where she was crowned May Queen. She was a devoted Christian, wife, mother, and grandmother. She loved University of Kentucky basketball, and never forgot her family and friends in the mountains of eastern Kentucky.

Special thanks to St. Anthony’s Hospice, Lucy Smith King Care Center, where Gleeda was taken of with love.