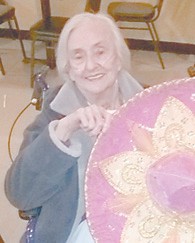 She passed away Wednesday, February 27, 2019, at the Greg and Noreen Wells Hospice Care Center in Hazard after a long illness.

Helen was the daughter of the late Marion Ross Minor and Betty Jane Caudill Minor. She was born in Pardee, Va., and grew up there, in Neon, in Whitesburg, and in Isom. The entire town of Pardee, a coal camp for the Blackwood Coal Corporation, was razed about 1980, and the land where it sat was strip mined.

Helen moved to Letcher County permanently in 1947 after her parents’ divorce. She met her husband, the late Charles L. Adams, at Isom in 1949 after he was discharged from the U.S. Army the first time, and the two married in 1950 and had a son who died at birth. Charles returned to the military in 1951, and the two lived in Harrisburg, Pennsylvania, until he was deployed to combat duty in Korea. Helen gave birth to a daughter who died at birth while Charles was in Korea, and Helen nearly died as well.

Helen was retired, having spent many years as a sales representative and manager for Avon and for Sarah Coventry. She had a large collection of genealogy papers, and was fascinated by her Melungeon heritage. Charles, a longtime electronics technician for Sears Roebuck and Co. and Service Officer for the local chapter of the Disabled American Veterans, died in 2004. Both he and Helen were longtime members of the Isom Presbyterian Church, and had been married for 54 years at the time of Charles’s death. Helen became confined to a wheelchair after his death and was rarely able to get out. She lived with her son’s family at Isom.

Funeral services were held at 1 p.m. Saturday, March 2, 2019, at the Isom Presbyterian Church with Pastor Duane Beachy officiating. Visitation was at 6 p.m. the previous night at the church. Burial was in the Shade Adams family cemetery at Isom, where her husband, two children and her mother are also buried.