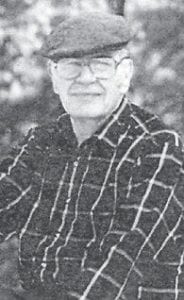 Funeral services for James Breeding, 88, were held May 17 at Letcher Funeral Home. Burial was in the Fields Cemetery in Whitesburg.

He was married to the late Rudell Fields Breeding and after her death married Audrey LaRue Breeding, who survives him.

A veteran of World War II, he served in the U.S. Air Force and was stationed at Hickman Field during the bombing of Pearl Harbor. He was a charter member of Veterans of Foreign Wars Post #5829, and was employed by the U.S. Postal Service for 37 years.

Breeding died May 15 at the Eastern Kentucky Veterans Center in Hazard.

Surviving in addition to his wife are a daughter, Rachel Ann Breeding of Whitesburg; three stepchildren, Lisa Isbell and husband David of Nederland, Tex., Mona Collins of Somerset, and Scott Collins of Vancouver, Canada.; a step-granddaughter, Blair Cecile Wilson; and two stepgrandsons, B. J. Stallings and Robert Wilson.