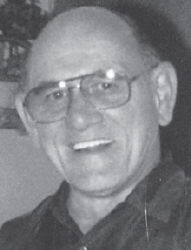 Born in Perry County, he was a son of the late Robert and Edith Stacy Pugh.

Johnny was married to the late Effie Mae Pugh, who died September 4, 1993. He later in life married Banzel Collins on June 2, 1997. He enjoyed watching baseball games and spending time with his family and friends.

Funeral services were held July 19 at the Little Colley Pentecostal Church. Burial was in the Collins Cemetery at Little Colley.