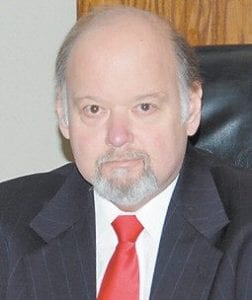 Wood, 55, died Oct. 21 at St. Joseph Hospital in Lexington after a long illness. He had officially retired January 30 after 16 years on the bench as judge of Kentucky’s 47th District, but remained on the job when he was physically able while awaiting Gov. Steve Beshear to appoint his temporary replacement.

As a part-time “senior status judge,” Judge Jim Wood’s workload was reduced to give him more time to fight diabetes and kidney disease from which he suffered.

“I actually didn’t want to retire,” Wood said during an interview with The Mountain Eagle in February. “I have always enjoyed going to work.”

Because of diabetes, his kidneys began to fail in the summer of 2008 and Wood underwent peritoneal dialysis four times a day.

Wood first visited Letcher County 27 years ago when he was just out of law school. He drove from Louisville to Whitesburg to see if it would be a place where he would like to live and work. Wood, who never got out of his vehicle on that trip, was told by an attorney from Pikeville that he might like to practice law in Whitesburg.

“I got my map out, drove through downtown, went back and said ‘That will be fine,'” said Wood. “I thought, ‘Man, what a beautiful place.'”

Wood, who was graduated from Western Kentucky University and the University of Kentucky College of Law, moved to Whitesburg in August 1982 and began handling a variety of cases after opening a practice with attorney Carolyn Friend, who left Letcher County a short time later.

Wood later worked as a public defender before becoming an assistant commonwealth’s attorney and assistant county attorney. He was appointed district judge of Letcher County in 1993, having been preceded in the office by former judges Randall Bentley and Larry Collins, and present Letcher Circuit Judge Sam Wright.

Wood was proud of several worthwhile programs which were started in district court during his tenure, including a program that monitors people on probation for misdemeanor charges. Wood was instrumental in creating a juvenile drug court in Letcher County. A truancy diversion program at Beckham Bates Elementary School created by Wood has improved the attendance rate at the Colson school.

Wood also started an insurance diversion program in which defendants are required to buy an auto insurance policy rather than just pay a fine for not having insurance.

Judicial secretary Debra Gibson, who worked with Wood for 26 years, said Wood was very knowledgeable and was always available for assistance.

Linda Bell, who works in the county attorney’s office, said Wood liked to give people a second chance and see them succeed. She said he had a heart for people.

Assistant Letcher County Attorney James Hubbard said Wood was respectful to both attorneys and those charged with crimes. Hubbard said Wood never embarrassed him in front of anyone in the courtroom and said that is a unique trait for a judge.

Hubbard said he was always amazed to watch people turn around as the bailiff was escorting them out of the courtroom to thank Wood even though he had just ordered them to serve jail time.

“I have people come up to me at Walmart who I have put in jail numerous times and act like we are best buddies,” Wood said in the February interview. “If you tell people why they are going to jail, they know why they are going and they don’t blame you. They know you are doing your job and treating them like a person.”

Mike Watts, a court designated worker for juveniles, said Wood always helped guide him on how to best handle situations.

Watts said Wood always had time to speak with everyone whether it be “a man in a three piece suit or bib overalls.”

“He’s always been accessible to everyone, not just court officials,” said Watts. “He has always had an open-door policy, which is kind of unusual. It doesn’t matter what I would go to him for he always had the right answer.”

Letcher County Attorney Harold Bolling said Wood was an innovator who was one of the most intelligent attorneys he has ever known.

“He loved people,” said Bolling. “He was kind. He was compassionate. He was a gentle person. He was always helpful.”

Bolling said what he liked best about Wood was how the judge always had time for people.

“You know most lawyers value their time and they expect to get paid for their time,” said Bolling. “Jim gave freely of his time. If you came to Jim’s office looking for his help, he gave you his time. He was the most patient and kindest person I have ever known with his time.”

Bolling said he remembers Wood finishing his courtroom duties earlier than usual on one of his last days in office. Bolling said he sensed that Wood wasn’t feeling well and urged him to go on home, but that Wood insisted on staying the rest of the day in case someone needed his help.

“I always loved the way Jim could figure out some way to help someone out of a bind yet teach them a lesson at the same time,” said Bolling.

Born in Nashville, Wood was the oldest son of the late Jim and Essie Wood. He was reared in Louisville with his brother, Sam. Wood was graduated from Seneca High School.

Wood, who was a fan of UK athletics, attended many football and basketball games with Sam, including the 1978 and 1997 Final Fours. He was also a fan of Cincinnati Reds baseball.

Before Wood was 15, he had visited each of the 48 continental states in the U.S. He most recently enjoyed a trip to Alaska.

During his high school and college years he was a car enthusiast who raced at Beach Bend Park.

Wood married wife Patty in 1998. They remodeled a house located on Tunnel Hill in Whitesburg, where they enjoyed sharing the beautiful views of the surrounding hills, especially after a large snow. The Woods hosted many gatherings at their home.

Wood enjoyed boating and fishing with his niece and nephews and taught them how to safely fire a gun.

In addition to his wife, Wood is survived by one son, Josh; two stepchildren; Geoff (Amiee) Cody and Tommie Cody; one brother, Sam (Maureen); three nephews, Brian, Mitchell and Stephen; a niece, Clara; and three grandchildren, Lexi, Peyton and Noel.

Funeral services were held at First Baptist Church in Whitesburg. Burial was in the Green Acres Memorial Park at Ermine.

Donations to the James T. Wood Scholarship Fund, which has been established for Letcher County youth in Wood’s name, can be made at Whitaker Bank in Whitesburg.