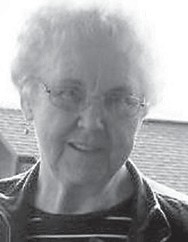 Born in Kingscreek to the late Arthur and Polly Victoria Cornett Wells, she was the widow of Denver Gambrel, and was later married to Cleo Ham and Henry Gibson, who also preceded her in death.

She was a sister of the late Helena Creech, and Neldon, Leroy, Luther, Johnnie, Coolie and Billy James Wells.

She was a member of Parlor Grove Baptist Church and was a retired nurse’s aide with McDowell Home Health Agency.

She is survived by a daughter, Angie Reichenbach and husband Keith of Stanford; two sons, Tim Gambrel and wife Karen of Harrodsburg, and David Gambrel and wife Kelly of Waynesburg; a granddaughter, Haley Reichenbach; four grandsons, Alan and wife Tasha, Joey and wife Mandie, Denver and John Gambrel; a great-granddaughter, Brooke Gambrel; three great-grandsons, Parker, Taylor and Joey Gambrel II; a sister, Iva Cheatham of Stanford; a brother, Bobby Wells of Ohio; cousins, Mary Elizabeth Bailey and Jackie Wilder, with whom she was raised, and a special neighbor and friend, Shirley Smith.

Funeral services for Mrs. Ham were held August 6 at Spurlin Funeral Home in Stanford. Burial was in Parlor Grove Cemetery in Waynesburg.