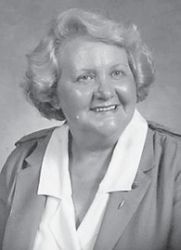 She was a daughter of the late James Woody McElroy and Verdie Ethel Mullins McElroy, amd was born at Big Stone Gap, Va. She was the widow of Okie Mason.

A retired beautician, she was past owner of Opal’s Beauty Shop in Cleveland, Ohio, and was retired from the Copper Comb at Mayking.

Mrs. Mason was a member of the Millstone Missionary Baptist Church, and had lived with her daughter at Millstone, and her son at Thornton.

She was the mother of the late Johnny James Mason, and a sister of the late Dorothy Jean Johnson, Barbara Ann McElroy, Ralph McElroy and Woody Edward McElroy.

Funeral services were held October 2 at the Millstone Missionary Baptist Church. Burial was in the Payne Gap Cemetery.