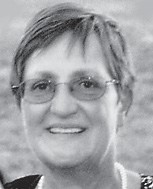 Graveside services were held at the Maggard family cemetery in Whitesburg recently for Linda S. Cammuse, 70, of Hatton in Shelby County.

A former resident of Whitesburg, Mrs. Cammuse died November 8. She was retired after 44 years from the Crestview Healthcare.

Mrs. Cammuse was a daughter of the late Willard and Dorthy Maggard, and the widow of Lee R. Cammuse. She was also preceded in death by a sister, Anna Combs.

Funeral services for Mrs. Cammuse were held November 12 in Shelbyville.